We have now developed a good method for measuring the wetlands bathymetry (topography of the wetlands).

The work is done in our networking project “Wetlands as buffers”, where 15-20  wetlands from LIFE-Goodstream are incorporated. By combining sonar data that we get from paddling with a SUP and sonar in the open water, with high resolution GPS-measurements from the shoreline and in high and dense vegetation in shallow water we get very good data on the depth and shape och the wetlands. The above photo shows Sofia paddling with a sonar and the below photo shows the position of the water depth data points from the sonar (blue) and the water depth data points from the GPS (white). From this we can construct very detailed depths curves of the wetlands. 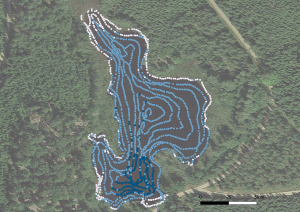